I created this blog as a form of participation in the lingerie blogging community, but this post is not about lingerie or clothes or style. It’s about events in my home country, events, that left me almost speechless and incredibly sad, events that now make me worried, pessimistic and angry.

I was never interested in politics. I never believed in our political system, so I just ignored it. I lived in my nice little world, filled with job I loved, warmness of my friends and family, travels, nice clothes and pretty bra collection. So when #Euromaidan started I thought that our government behaved irresponsible by just ignoring it, but didn’t pay much attention. I had a tough  deadline to meet and winter sales to reward myself for meeting it with good results.

And then it hit me when I clicked the link and read that while I was sipping my coffee, chatting with friends, writing code and playing with my cat government of Ukraine was killing dozens of people. It felt like a complete nightmare, I had never thought that such a bloodbath had been possible in my country. It was crystal clear that there was no way back. After that choice was a dictatorship or a real revolution. My nice little world was falling apart.

It was practically a miracle, but people of maidan won.

Maidan organizational structure is based on hundreds (many self-defense hundreds, cyber-hundred, medical hundred etc), after events of 18th-21st of February a new hundred were added: Heaven hundred.

Heavens hundred. Heroes do not die!… but they die
Photo: debaterage.livejournal.com

Most of them were killed by snipers. Many of them were terribly young, the youngest was 17 year old. But there were people of all ages, different ethnicity and occupation. Students. Farmers, teachers, workers, actor, computer developer, musician… Ukrainian, Russian, Georgian, Armenian, Jewish origin… Ukraine still mourns them.

Flowers, it’s only a small part of them
Photo: Egor Lukanin

After the revolution there were hopes and there was fear. Fear that politicians do their usual thing and all these deaths will become waist. Fear that corruption and kleptocracy find a way back. And fear that with this level of corruption when we remove it there will be nothing left, no law and no order. So maidan doesn’t go anywhere, they stay as a reminder to our parliament. Reminder that they don’t have a right to become a new dragon.

And then when it looked like everything starts to calm down and there is hope after all, Crimea was occupied by green men. Our dear Russian brothers deny that they are their soldiers, so we call them green men. 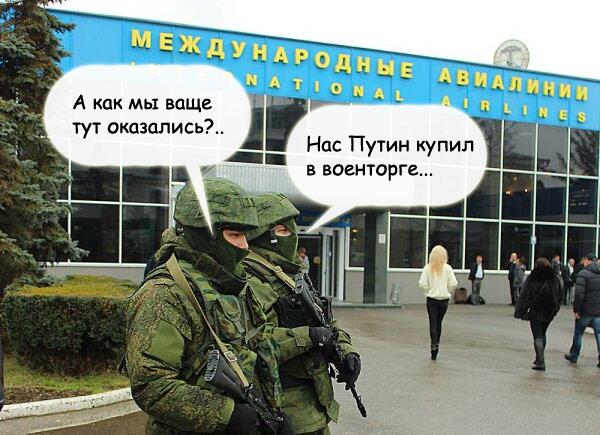 – How did we get here?
– Putin bought us in Voentorg*.
*Voentorg is a chain of army shops, where you can buy boots and clothes, but nothing like automatic weapon or RPG, Putin claimed that green men bought everything there and are not regular Russian troops.

And that was a shock too. Because “Russian brothers” are our brothers not just in political rhetorics, we are brothers quite literally. A lot of people have family living at both side of the border and I’m no exception, my uncle and my cousin live in Moscow. So a war with Russia in a way feels like a civil war to me.

I have relatives in Crimea, which now is occupied. Right now they are ok, but situation there is very volatile and if I lived somewhere on the West I would invite them to us, but it has no sense as Russians can invade here any moment.

Russians often mention Russian speaking people of Ukraine as just “Russians living in Ukraine”, but that’s not how vast majority of us identifies ourselves. We are Russian-speaking Ukrainians. Just like English speaking Americans are not English.

Ukrainians have different mentality, vast majority of us don’t have imperial complex, being part of the most great and scary means nothing to us, for us it’s more about hard work and reward for it, about freedom, and main role of the state in opinion of many Ukrainians is do not hinder. So while ethnically South and East of Ukraine is more close to Russia and we speak Russian, mentally South and East are more close to the rest of Ukraine than to Russia. We don’t want to fight with Russia, but we will if we have to.

And thought that we can start to kill each other every minute because of Putin’s ambitions makes me sick. Thought that I live in about 30 miles from Russian border makes me fear for my life. Right now diplomats are still trying to talk and Russians are trying to pretend that their actions are not plain and simple aggression toward peaceful country. But if Russians cross the border elsewhere, then there will be nothing to talk about anymore and the war will be as ugly as it gets.

There is not much hope left, but contra spem spero*.

* This is not just Latin phrase, it’s a name of famous poem of Lesya Ukrainka (translation doesn’t do it justice, but it’s a best translation I was able to find).

6 thoughts on “Ukraine’s glory has not yet died, nor her freedom…”